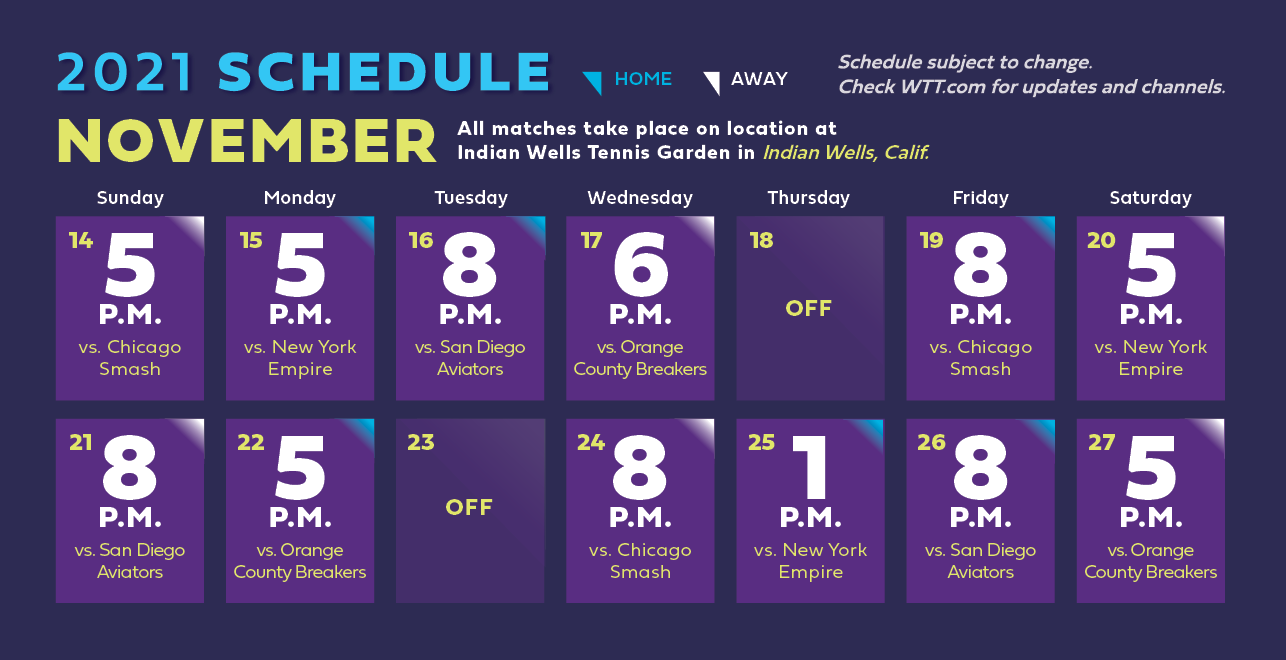 The World TeamTennis league announced in May the 2021 season would be postponed from July to Nov. 13-28, and all teams would compete in a single location, similar to the 2020 WTT season. This year’s season is at Indian Wells Tennis Garden, home of one of the largest tennis tournaments in the world, the BNP Paribas Open.

Lasers fans may once again enjoy watching 12 Lasers matches from home, with Mediacom Communications broadcasting each match live (except Nov. 25) on MC22: channels 22,722, 83-1 and 85-5. Matches are also broadcast and streaming through NBCSN, The Tennis Channel and FTF. Find a complete schedule with broadcast partners, at SpringfieldLasers.com/schedule/.

The season dates include (shown in Central Standard Time):

This year’s Lasers roster has changed since player announcements were made in July. Confirmed players include Catherine McNally, returning for her second season with the Lasers;  Mackenzie “Mackie” McDonald; Marcelo Arevalo, Denis Kudla, Asia Muhammad and Giuliana Olmos. Coach John-Laffnie “JL” de Jager returns for his 15th season coaching the Lasers, having served with the team since 2007.

World TeamTennis was co-founded by tennis legend and visionary Billie Jean King and has continued to innovate the sport every year since its debut season in 1974. The fast-paced action and unique scoring format creates an energized and exciting atmosphere for WTT fans and players. The team event affords the opportunity for men’s and women’s champions to share the court in each and every match throughout the season, including in the championship, with the King Trophy on the line. More information may be found at WTT.com.

The Springfield Lasers were established in 1996 by the late Harry Cooper. The team is managed by the Springfield-Greene County Park Board, and is now one of the oldest teams in the WTT league. The Lasers won back-to-back WTT Championships in 2018 and 2019, after five previous trips to the WTT finals.