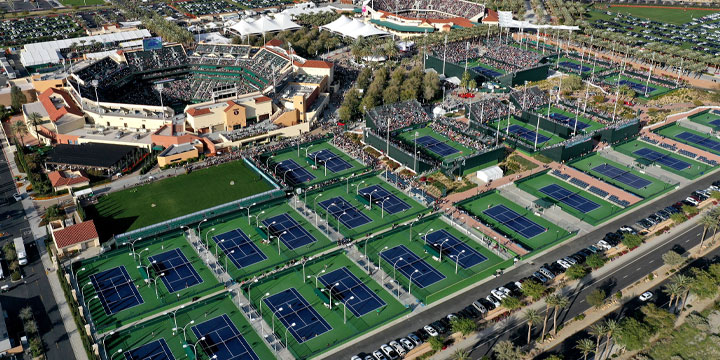 INDIAN WELLS, Calif. (May 20, 2021) – World TeamTennis will host its 2021 season at California’s Indian Wells Tennis Garden November 13-28. Five teams will participate in the league’s 46th season, contesting a total of 31 matches over 16 days in the venue’s Stadium 2.

“We are extremely excited to announce that we are hosting our 2021 season at the greatest tennis destination site in the world,” said WTT chairman and CEO Eric Davidson. “The state-of-the-art facility, world class players, incredible weather and destination location will make the 2021 season one of the most enjoyable yet for our fans.”

The leader in professional team tennis competition, WTT is making the move from its traditional July dates to November to ensure the opportunity to safely host as many spectators as possible. This will be the second straight WTT season held in a single venue after the 2020 campaign took place at West Virginia’s Greenbrier and yielded several broadcast audience records, including a peak viewership of over 1.1 million for last year’s final.

The last four teams to win the World TeamTennis King Trophy will be among the five teams participating in the 2021 season. Defending champions New York Empire will be joined by the Springfield Lasers – winners of back-to-back titles in 2018-19 – as well as a pair of championship teams from Southern California: Orange County Breakers (2017) and San Diego Aviators (2016). Rounding out the field for 2021 is the Chicago Smash, which finished as runner-up in its debut WTT season.

Former World No. 1 and four-time Major champion Kim Clijsters will return for her fourth WTT season to once again lead the Empire while 2017 US Open Champion Sloane Stephens is back for Chicago, looking to avenge the heartbreaking loss that the Smash suffered in the 2020 WTT Finals. John Isner will be playing his ninth WTT season and his first for the Breakers while Southern California native Taylor Fritz, the top-ranked American, returns to the Aviators in 2021.

“I am super excited to be back playing WTT for the Chicago Smash in 2020,” said Stephens. “I really enjoy the team format and it is such a fun block in my schedule every year. We were so close to winning it all last summer and I can’t wait to come back and try to bring that King Trophy back to Chicago.”

Isner is equally excited for the upcoming season. “I have always had such a great time playing WTT and getting the opportunity to play more than just one or two matches this year will be a blast,” he said. “Plus, when I found out the season would take place in Indian Wells, I knew this was an opportunity I couldn’t pass up.”

The 2021 schedule will be released in the coming weeks and will feature two matches per day. Each team will play 12 total matches during the upcoming campaign, with the top two teams in the standings advancing to play for the King Trophy on Nov. 28.

Due to the revised format this year and the inability to host home matches in 2021, the Philadelphia Freedoms, Vegas Rollers, Orlando Storm and Washington Kastles will not be participating in the upcoming WTT season. These franchises remain in good standing with the league and WTT anticipates these teams will be back on the schedule in 2022.

World TeamTennis was co-founded by tennis legend and visionary Billie Jean King and has continued to innovate the sport every year since its debut season in 1974. The fast-paced action and unique scoring format creates an energized and exciting atmosphere for WTT fans and players. The team event affords the opportunity for men’s and women’s Major champions to share the court in each and every match throughout the season, including in the championship with the King Trophy on the line. More information can be found at wtt.com.