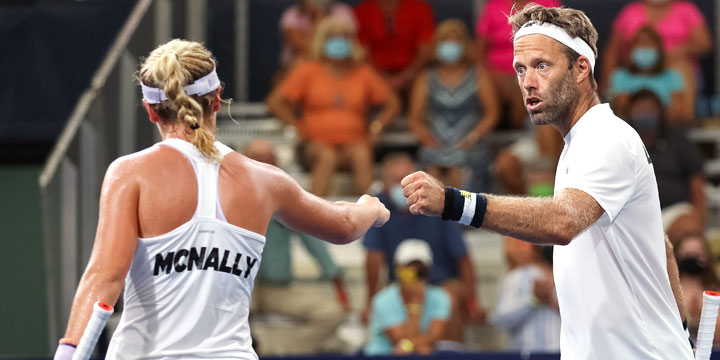 Two-time defending champion Springfield is hanging on to its playoff hopes by a thread. Or, in its case, a Laser.

Which is why Lasers coach John-Laffnie de Jager said he drafted his team based on character, players with a never-give-up attitude that will compete to the end.

Sitting near last place heading into Monday’s match, the Lasers outdueled the Vegas Rollers, 24-19, to remain in the playoff hunt.

The Lasers moved within 1.5 games of the fourth-place New York Empire. Springfield holds the tiebreak edge over the Empire and must win the rest of the way to have a chance.

“We always come out to win even though we stand where we do right now,” de Jager said. “Everybody is out there fighting, doing their best. We’ve got two matches left. We’re gonna play, we’re gonna try and win that. What’s important to me, what I tell the players, we always want to win.”

Vegas coach Tim Blenkiron generally uses Bob Bryan and Mike Bryan at the end of his home matches, but with the Rollers eliminated from playoff contention, he led the match off with the world’s greatest tandem against Springfield’s Robert Lindstedt and Jean-Julien Rojer.

The Rollers were able to get back on serve after falling behind 3-2 and win three of the last four games, including a tiebreak, to open the match with a 5-4 set-victory.

Springfield’s Catherine McNally was next on the court for women’s singles and was tasked with facing fellow first-year WTT player Ajla Tomljanović, who has been a bright spot for the Rollers.

Tomljanović went up 2-0 in the set, but McNally quickly responded by winning the third and fourth games. Tomljanović took the fifth game, but that would be the last victory she’d taste, as McNally was stellar in winning the last three games, including an incredible deciding-point to break serve in the seventh game, when she sent Tomljanović wide, then positioned herself just inside the baseline for a forehand smash to the complete opposite side and painted the corner.

McNally then closed the set out by holding serve to win, 5-3, and put Springfield ahead in the match, 9-8.

“We’re kind of in last in the standings but as a team, we’re going to keep fighting, we’re gonna keep competing for every single point,” McNally said. “Today we kind of said Albert Einstein, we’re gonna mathematically get our way into the playoffs.”

The mixed doubles match between Lindstedt and McNally against Vegas’ Mike Bryan and Monica Puig turned into a battle of key service breaks, as both teams stole points from one another early on.

Just like in women’s singles, the Rollers opened a 3-2 lead, but the Lasers turned it on at the end to win the final three games and open a 14-11 lead in the match.

Then it was McNally teaming with Hayley Carter and Olga Govortsova to defeat Tomljanović and Puig, extending the Lasers’ lead to 19-14 thanks to a 5-3 set win.

With her 3-0 day, McNally said she felt it was her best performance of the season.

“It’s very new for me, I’m so used to being out there by myself,” said McNally, who was named the Guaranteed Rate Player of the Match. “It’s a great experience to have teammates. I’m so lucky that I have such great teammates, a great coach out here. I’m learning so much about doubles, singles. The format is definitely different, I’m just getting used to it.

“I’m just happy I could pull through for our team and I think we all did a great job today.”

Springfield’s Mitchell Krueger and Vegas’ Sam Querrey went to a nine-point tiebreak, where the Rollers’ hard-hitting ace specialist forced extended play with a 5-4 win that cut the Lasers’ lead to 23-19. Krueger opened extended play by holding serve to give Springfield the win.

“The last few matches we would have played the same, if we’re in contention or not,” de Jager said. “We were lucky this year because we had a good mix of young players and veteran players. We have six players that’s world-class on this team and everybody can learn from each other. We’ve become very close and it’s awesome to have all of them on the team.”

Willie Ramirez has covered the Vegas Rollers since their inaugural season. He is a 33-year veteran covering sports in Southern Nevada, and resident of 47 years. He is a freelance reporter in Las Vegas and the Southern Nevada correspondent for The Associated Press. Follow him on Twitter at @WillieGRamirez.