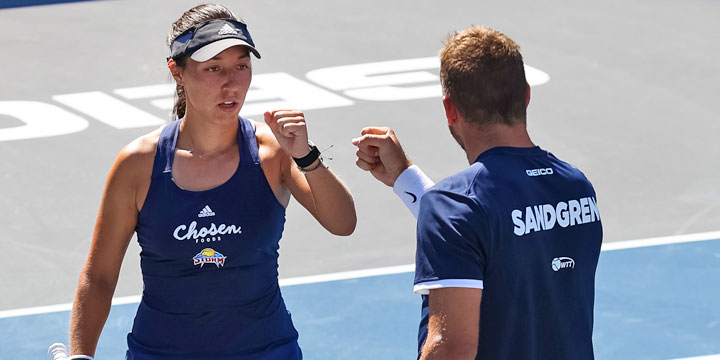 It is said that it’s not always the best team that ultimately wins in the playoffs, but rather the hottest team. With less than a week to go until the World TeamTennis playoffs, there may be no hotter team in the league than the Orlando Storm.

The Storm (7-4) picked up their fourth consecutive win Sunday with a 24-17 triumph over the Springfield Lasers. In doing so, they moved closer to earning the franchise’s first playoff berth.

“[The WTT Playoffs have always] been the focus. Make the playoffs,” Tennys Sandgren said.  “We still need to win one or two more matches. I know we play Washington the last day of the regular season, so it might come down to that. We just need to keep playing well.”

Just like in Saturday’s match versus Philadelphia, Sandgren and Ken Skupski set the tone for Orlando in men’s doubles. They weren’t able to repeat their 5-0 shutout from the day prior, but their 5-3 victory set the Storm off on the right track nonetheless.

The Lasers’ team of Robert Lindstedt and Jean-Julien Rojer did have two points on their serve to push the set into a tiebreaker, but Sandgren made sure it wouldn’t get that far. First, he ripped a low-lining, cross-court, backhand winner past Rojer. Then, at 40-all, he handled a massive overhead smash by Lindstedt from far beyond the baseline and returned it toward Rojer. The Dutchman’s volley at the net came off his racket with no life and didn’t make it back across.

In women’s singles, Jessica Pegula once again displayed her blend of strength and finesse, mixing serves that reached near 110 mph with delicate drop shots and well-placed slices. Those skills helped her save three game points to keep 18-year-old Catherine McNally from tying the set at 3-3. Down 40-0, Pegula came back with a strong forehand winner, a slicing, backhanded volley that landed right on the sideline, and a deep return of serve that led to an error from McNally. Now at 40-40, she put another return of serve deep into the court, and McNally shot it wide. Pegula would easily hold the next game, polishing off the 5-2 set with a couple of service winners.

#WTT2020: @TennysSandgren wins four straight points in the first game of Extended Play to win the match for the @OrlandoStormWTT, 24-17, over the @SGFLasers.

The rally of the match came during the third set, mixed doubles. With Springfield serving, Pegula returned at least five shots from Rojer and McNally while standing her ground near the service line. No matter if it was a volley or a groundstroke, Pegula had an answer for everything and finished the point by rocketing a backhand winner that McNally turned away from. At the end of this short segment of two-on-one tennis, Pegula’s partner, Sandgren, turned toward her and bowed with his arms outstretched as if to say, “We’re not worthy.”

Pegula and Sandgren won three of the next four points to break Springfield’s serve and take a 4-2 lead. Although the Lasers would break back in the next game, they lost their serve again immediately afterward as Pegula and Sandgren took the set, 5-3.

Women’s doubles was the only set of the morning that involved a tiebreaker. The Lasers had yet another opportunity to make up some ground as they were serving with two set points on their rackets. But at 4-3 in the tiebreak, Orlando’s Darija Jurak fired a winner down the alley. On the deciding point, Pegula shot a hard forehand toward the center of the court that Springfield’s Hayley Carter put into the net.

That evasive set point winner finally arrived for Springfield in men’s singles as Mitchell Krueger defeated Sangren, 5-3. But that still left Krueger with six games to make up in Extended Play. Six games is the biggest margin ever overcome in Extended Play of a WTT match. It occurred in 1988.

It did not occur today.

Sandgren took the first game at love, ending the match with two service winners and an ace.

The Storm sit alone in third place with three matches to go in their regular season. The top four teams qualify for WTT’s postseason, and Orlando will reach the final week of the season at least one fulll game ahead of the fourth-place Washington Kastles, pending the rest of Sunday’s results.

The loss dropped the Lasers (3-8) into last place.

— Pegula has participated in a trio of sets in each of the Storm’s past four matches. She has won 9 of those 12 sets and 58.7% of the games played.

— Pegula dominated the second serve points in her singles set against McNally. She claimed nine of 11 points on her second serve while McNally won just two of six such points. For the match, the Storm led that category comfortably, 60% to 43%.

— Sandgren and Skupski have won their past four sets together in men’s doubles.

— Sandgren tallied six aces in his singles match, giving him 42 on the year. That’s the second-most of any WTT singles player, trailing only the Vegas Rollers’ Sam Querrey, who entered Sunday with 48 aces.

— Even with the victory in mixed doubles, Orlando is just 4-7 in that configuration this season.

The Storm will look to stay on a roll when they face the San Diego Aviators on Monday at 7 p.m. The match will be broadcast on CBS Sports Network. Orlando prevailed, 22-21, when these teams met on July 17 in one of the season’s most exciting matches. It had to be decided in supertiebreaker where Sandgren got past Ryan Harrison, 7-5. The Aviators (3-7) will head into their Sunday night match versus the Philadelphia Freedoms on a four-match losing streak.