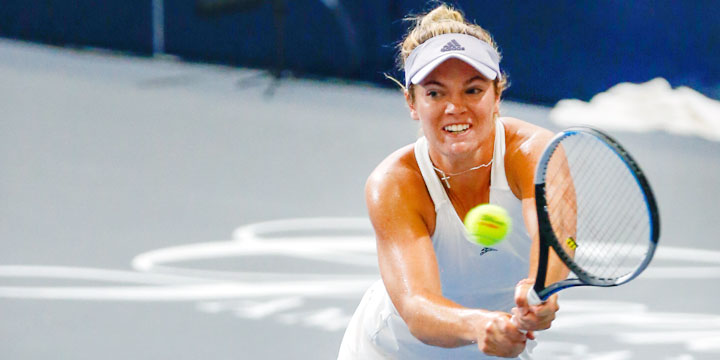 Caty McNally may be making her World TeamTennis debut this season, but the 18-year-old from Cincinnati is playing like a WTT veteran.

She scored big wins in mixed doubles with Robert Lindstedt and women’s doubles with Hayley Carter to lead the Springfield Lasers to a hard-fought 22-18 victory over the San Diego Aviators in World TeamTennis action at The Greenbrier.

SPRINGFIELD LASERS vs. SAN DIEGO AVIATORS MATCH STATS
“I’m just grateful to have the opportunity to be here at The Greenbrier. It’s my first time playing World TeamTennis. I’m grateful to get some matches in and be on a team,” McNally said after the victory.

“I definitely had some pressure today. I tried to just thrive in it and not let it affect me too much. I’m happy with the way I played. I was able to play some really good tennis,” McNally added.

With the four-game win over San Diego, the Lasers are now 3-6. The Aviators, who have dropped three straight matches are now tied with the Lasers at 3-6. Today’s match marked the only meeting of the season between San Diego and Springfield.

The loss was another frustrating result for the Aviators who have had their share of close losses this season.

The match came down to mixed doubles as CoCo Vandeweghe and Nicole Melichar of the Aviators took on McNally and Carter of the Lasers with Springfield leading San Diego 17-14.

The Aviators led the mixed doubles set 2-1 when Carter hit a cross-court backhand wide on break point to drop serve. Vandeweghe easily held serve in the next game to extend the Aviators lead to 4-1.

Just when it looked like Vandeweghe and Melichar would wrap up the set, McNally held serve and the Lasers then broke Melichar to get back on serve. After Carter held serve, the set went to the tiebreak.

The Aviators had three set points in the tiebreaker to send the match to Extended Play, but the Lasers made a furious comeback. At 3-4 McNally hit a cross-court backhand winner to even the score at 4-4 and gain match point for the Lasers.

McNally then clinched the victory for Springfield with a perfectly executed backhand winner at the net to end the match.

Jonny O’Mara and Ryan Harrison opened the day’s action for the Aviators in men’s doubles against Jean-Julien Rojer and Lindstedt of the Lasers.

At 1-1, O’Mara double-faulted on break point to drop serve as the Lasers took a 2-1 lead. Rojer then held serve in the next game to extend Springfield’s lead to 3-1.

Later, with the Lasers leading 4-3, Rojer served for the set. San Diego had a breakpoint at 30-40, but Rojer slammed a cross-court overhead to get to a deciding 3-3 point. O’Mara’s down the line forehand service return went long as Rojer held serve to give the Lasers a 5-3 win in men’s doubles. With the fast pace of play, the set took only 11 minutes to complete.

Christina McHale took the court next for the Aviators as she faced hard-hitting Olga Govortsova of the Lasers in women’s singles.

The 6-foot Govortsova opened the set with a love hold and then took a 2-0 lead when McHale committed a forehand error on break point to drop her serve.

Govortsova began dictating points and held serve to extend her lead over McHale to 3-0.

Coach Lloyd substituted Vandeweghe for McHale. Vandeweghe got the Aviators on the scoreboard when she put away an overhead winner on a 3-3 deciding point to hold serve.

Govortsova then held serve in the following game when Vandeweghe netted a forehand on game point.

Vandeweghe cut the Lasers lead to 4-2 in the next game when she hit an ace on game point to hold serve.

Govortsova then held serve to win the set 5-2 in 26 minutes when Vandeweghe’s cross-court backhand service return landed wide on a crucial 3-3 deciding point.

With the Aviators trailing the Lasers 10-5, Ryan Harrison helped San Diego get back on track as he took 24 minutes to win men’s singles with a 5-2 victory over Mitchell Krueger of the Lasers.

The Lasers led San Diego 12-10 at halftime as Ryan Harrison and Vandeweghe of the Aviators faced Lindstedt and McNally in Mixed Doubles.

There were no breaks of serves and at 4-4, the set was ultimately decided in a tiebreaker. The Lasers took a 3-1 lead in the tiebreak and after McNally double-faulted to make the score 3-2, Lindstedt took over, hitting a backhand crosscourt volley winner to reach set point at 4-2.

With the Aviators fighting to stay in the set, Lindstedt came up with another big shot as the 43-year-old from Sweden knocked off a forehand service return winner to win the tiebreak 5-2 and the mixed doubles set 5-4.

San Diego trailed the Lasers 17-14 as they headed to the dramatic finish in the mixed doubles set.

The match was played at the indoor arena at The Greenbrier due to unfavorable weather conditions. It was the first match of the 2020season the Aviators have played indoors.

If you’ve been watching World TeamTennis action on the various media platforms televising the matches, chances are you’ve heard the voice with a thick, Latin-American accent. That distinguished voice belongs to none other than former ATP star Nicolás Pereira.

The 49-year-old Venezuelan, who was born in Uruguay, has brought a unique perspective and broadcast-style to WTT fans this season. When Pereira is broadcasting a WTT match, he shares his experience as a former player to describe the action on the court and what the players may be thinking during a match.

In 1988, Pereira was crowned the International Tennis Federation Junior World Champion after winning the Boys’ Singles title at the French Open, Wimbledon and the US Open.

Pereira reached a career-high No. 74 in the ATP Tour singles rankings in 1996 and during his professional career had notable wins over former No. 1 players such as Thomas Muster, Boris Becker, Gustavo Kuerten, Jim Courier and Stefan Edberg.

If you want to get a special insight to WTT matches this summer make sure to tune-in when Pereira is part of the broadcast team. You’ll be glad you did.

After a day off on Friday, the Aviators will be back in action on Saturday when they take on the Washington Kastles at 12 p.m. (PDT) at The Greenbrier.

The match will mark the second and final meeting between the Aviators and Kastles this season. Washington defeated San Diego 21-19 on July 15.