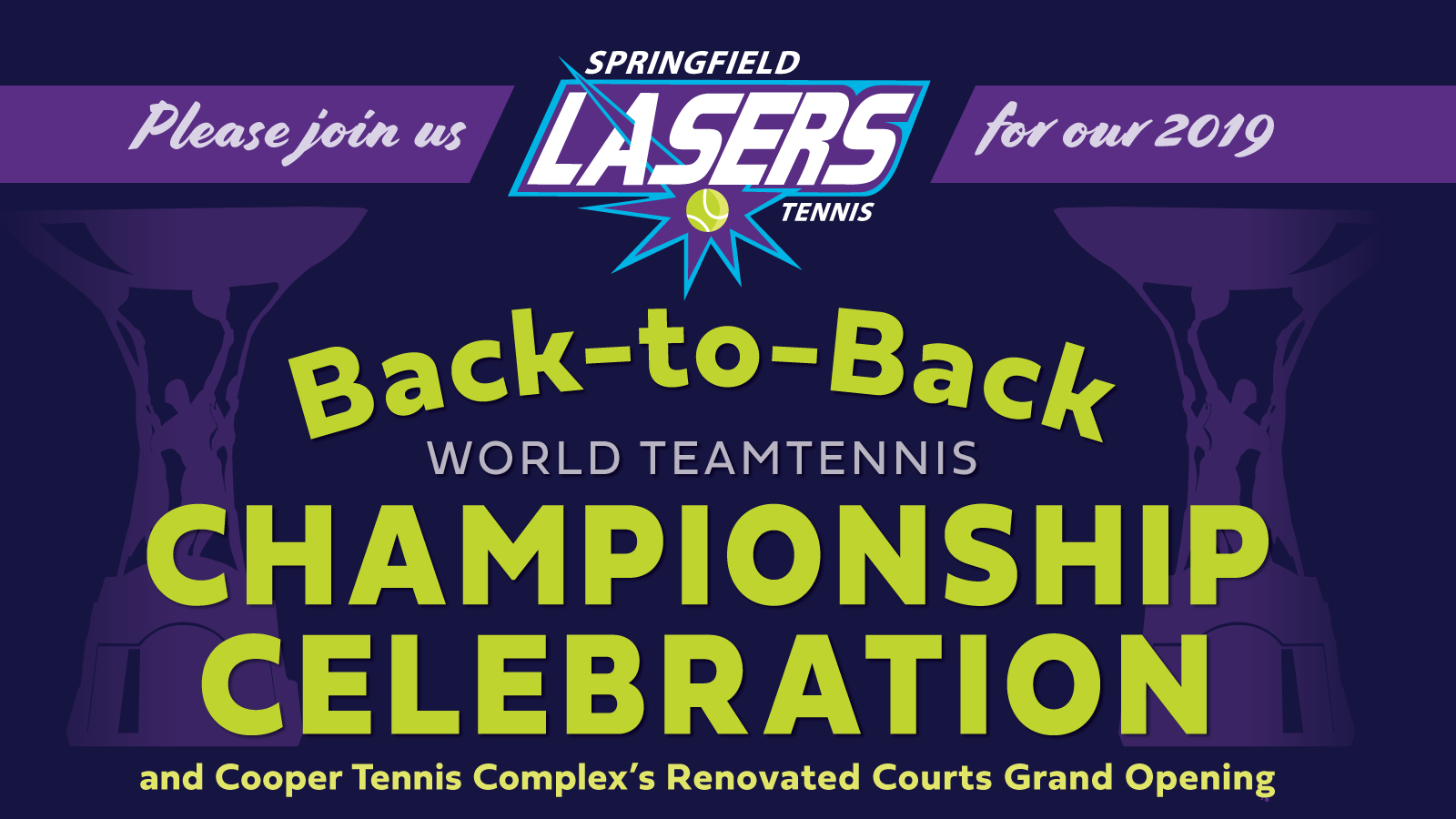 The event begins with a brief program dedicating Courts 1-6, followed by a party, with music, cake, photo ops with the King Trophy, door prizes and new Lasers Championship merchandise. While the team members are committed to appear in tournaments around the world, longtime Lasers Coach John-Laffnie “JL” de Jager will be in attendance, stopping in Springfield on his way home from the US Open in New York.

The Lasers defeated the New York Empire, 20-19, in the 44th WTT championship Saturday, Aug. 3, in Las Vegas, Nev. The audience included World TeamTennis co-founder and International Tennis Hall of Famer Billie Jean King, who helped present her namesake trophy to the Lasers. It was the Lasers’ second consecutive championship win. Springfield won its first King Trophy in 2018, after 23 years in the league and four previous trips to the championship final.

All Lasers fans are invited to take part in this free event. 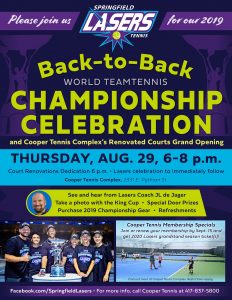 Cooper Tennis Complex opened at 2331 E. Pythian in 1994, and it had a major expansion in 2006. The facility has 12 indoor courts, 17 outdoor lighted courts, including a 2,500-seat stadium. Cooper also offers a full-service pro shop, locker rooms, fitness room and conference room. Lessons, programs and leagues are available for all ages. The facility was named USTA Outstanding Tennis Facility in 2000 and again in 2016. Cooper Tennis Complex was also named the USTA Missouri Valley Section Facility of the Year in 2006.

The building’s north indoor Courts 1-6 were closed in June to undergo the first major upgrade since the facility opened. New improvements include:

The south indoor Courts 7-12 also had resurfacing and color coating to match Courts 1-6.

The total project was budgeted at $500,000, with the work predominantly funded by the Cooper Family Foundation, along with Park Board operational funding support.

The late Harry and Jack Cooper were the primary donors and namesake of Cooper Park, including the Lake Country Soccer fields, Killian Sports Complex, and Cooper Tennis Complex. Harry Cooper and his nephew, John Cooper, also purchased the Springfield Lasers Pro Tennis Team for the Park Board 1996. John Cooper and his family still support the Lasers operation on an annual basis.

The Springfield Lasers were established in 1996 by the late Harry Cooper, who gifted the team to the Springfield-Greene County Park Board. The Lasers are now one of the oldest teams in  WTT, managed by the Springfield-Greene County Park Board and playing home matches at Cooper Tennis Complex. The Lasers won their first WTT Championship in 2018 and their second in 2019, after making it to the WTT finals in 2014, 2013, 2009, 2001 and 1999.