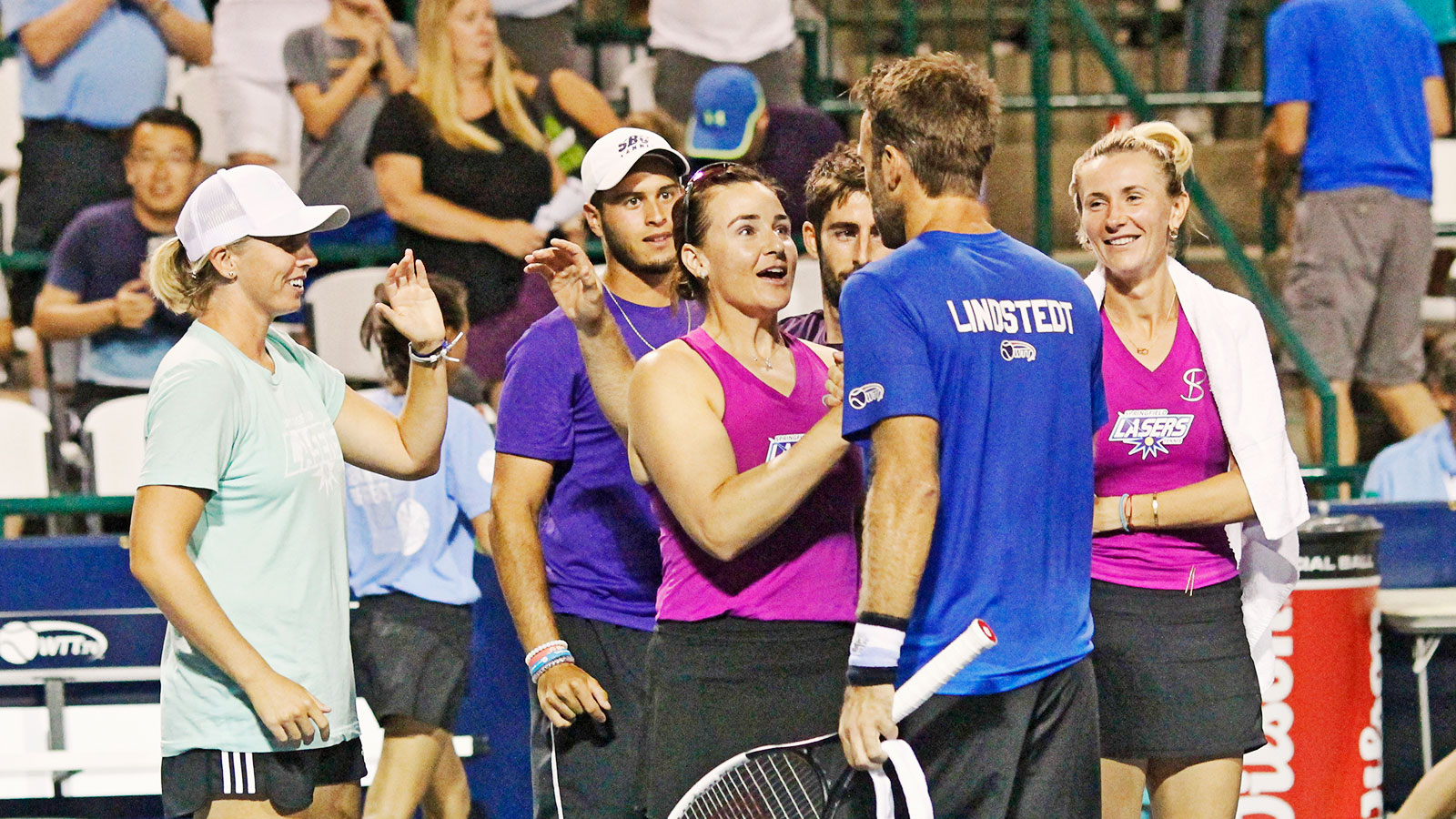 The World Team Tennis King Trophy will remain in Springfield another year as the Springfield Lasers’ begin their reign as Back-to-Back world champions.

The Lasers completed a final-set rally to edge the New York Empire, 20-19, in the 44th World TeamTennis championship match Aug. 3, in Las Vegas before an audience which included World TeamTennis co-founder and International Tennis Hall of Famer Billie Jean King. This is the Lasers’ second consecutive championship. After 23 years in the league, Springfield first one the King Trophy in 2018.

“Being from Vegas and winning in an event like this, it’s just a dream for me,” Song said. “It was an incredible atmosphere. I think I turned some of them (the fans) into Springfield fans.”

The Lasers (11-5) won just two of the match’s five sets, with Lindstedt was at the heart of Springfield’s success. The 2014 Australian Open champion and three-time Wimbledon finalist (2010-12) in men’s doubles also teamed with Abigail Spears to win in mixed doubles to even the match, 12-12, after three sets.

Lindstedt, the second-year WTT player from Sweden, was named the 2019 World TeamTennis Finals Most Valuable Player presented by Forevermark and received a one-carat diamond from Forevermark.

“It means I did something right. Proof that I achieved something,” Lindstedt said lightheartedly of the award. “We maybe took our foot off the gas a little bit (in the last game). Evan came up with a big point. It was great.”

Nine-year WTT veteran Abigail Spears is the only member of the current Lasers team who played on last year’s title team, and wrapped up her fourth season with Springfield.

In its fourth year of existence, No. 4 seed New York (9-7) clinched its first WTT playoff berth on the final day of the regular season after it finished 2-12 in WTT in 2018. Skupski and Maria Jose Martinez Sanchez are the Empire’s only roster holdovers from last year’s team.

“Woulda, coulda, shoulda. I love the way we fought. It came down to one game,” Empire coach Luke Jensen said.

The opening set of men’s singles between WTT rookies Blanch and Song was a high-performance competition that exemplified the energy and intensity both teams brought into the WTT Final. Both players channeled their adrenaline through a multitude of blistering serves and forehand winners with very few unforced errors.

New York’s Blanch, who replaced injured U.S. Davis Cup captain Mardy Fish in the Empire lineup in Friday’s WTT semifinals, earned the first service break in the seventh game to take a 4-3 lead and an opportunity to serve for the set. In a span of five points, he popped first serves of 138 miles per hour, 134 mph, 137 mph, and finally a 138 mph ace on deuce point (no-ad scoring in WTT) to win the set, 5-3.

The second set of women’s doubles came down to the final point of a nine-point tiebreaker, which favored New York’s go-for-broke aggression when Kirsten Flipkens slammed a forehand return of Olga Govortsova’s first serve down the line. The pace was too much for Springfield’s Spears, who lunged for the ball and could only redirect it into the net, giving Flipkens and Martinez Sanchez a 5-4 triumph (5-4 in the tiebreaker).

Facing WTT’s winningest mixed doubles team in 2019 – the Empire’s Skupski and Martinez Sanchez – and a 10-7 deficit put the Lasers in the pressure cooker to deliver in a pivotal third set through Lindstedt and Spears.

Lindstedt-Spears showed Springfield’s championship mettle and sparked a crucial break of Martinez Sanchez’s serve as Lindstedt hit backhand and forehand winners down the line past Skupski from the deuce court to earn the Lasers their last two points of the game and a 3-1 lead. They went on win the set, 5-2, handing Skupski-Martinez Sanchez their worst mixed doubles defeat of the season and evening the match score at 12-12.

The Empire struck back, however, through its singles specialist, Flipkens, who broke Govortsova’s serve three times in the fourth set en route to a 5-3 victory. Flipkens was 8-4 in women’s singles sets for the Empire this season.

CBS Sports will air highlights of WTT’s 2019 regular season and playoffs can be viewed on CBS Sports through its one-hour finals encore and season highlight show, “GEICO Presents World TeamTennis,” on Saturday, Aug. 10 at 1:30 PM ET/10:30 AM PT.

World TeamTennis’ year-end awards were announced on Saturday. New York’s Neal Skupski and Philadelphia’s Raquel Atawo were named WTT’s Male and Female Most Valuable Players presented by Forevermark, and each received a one-carat diamond from Forevermark. San Diego’s James Ward (who was acquired on July 28 from the Orange County Breakers) and the Orlando Storm’s Whitney Osuigwe earned WTT’s Male and Female Rookie of the Year honors. Philadelphia’s Craig Kardon won WTT’s Coach of the Year for the second consecutive season in guiding the Freedoms to a second consecutive regular season title.

WTT introduced professional team tennis to the world in 1974, with Billie Jean King famously serving as its co-founder. WTT is one of five active U.S. pro sports leagues which has been in operation for over 40 years, along with the NFL, NBA, NHL and MLB. For more information on World TeamTennis, please visit www.wtt.com.