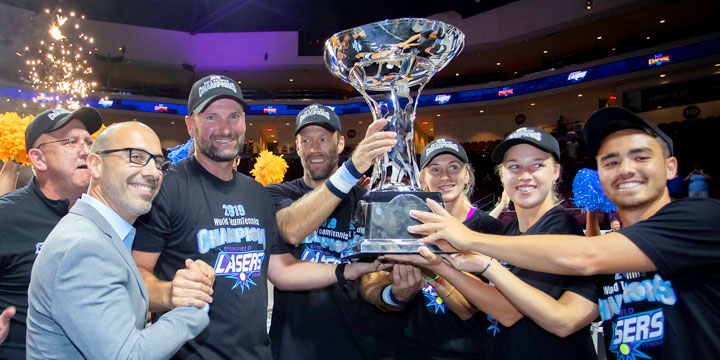 He walked off the tennis court at Orleans Arena on Saturday night as a member of the two-time World TeamTennis champion Springfield Lasers.

Song teamed with WTT Finals MVP Robert Lindstedt to win the Men’s Doubles set 5-2, over Ulises Blanch and 2019 Men’s MVP Neal Skupski, and deliver the second-seeded Lasers their second straight championship with a 20-19 victory over the fourth-seeded New York Empire.

“It’s incredible,” Song said. “I really wanted to redeem myself. I was so disappointed that I couldn’t pull off the singles and I don’t like to let people down. I wanted to give 100 percent effort and play the best I could for that set and try to get the win for everybody.”

Song, a Las Vegas-native and resident of nearby Henderson, and Lindstedt opened the final set with a 3-0 lead after breaking Blanch’s serve in the second game. The Lasers led 4-2 with left-handed Song serving for the match and a raucous hometown crowd that included four people holding signs that spelled out E-V-A-N cheering him on.

“Being born and raised in Vegas, to play in front of my home crowd in an event like this, it was a dream for me,” Song added.

Springfield coach John-Laffnie De Jager opened the match with Song starting in Men’s Singles, where he fell 5-3 to Blanch. After the two held serve over the first six games, Blanch broke through by stopping Song’s serve in the seventh, and then won the eighth game to give the Empire an early lead.

“I wanted Evan to play first because his success here has been in playing first,” De Jager said. “I knew if I got him out in the front, I was thinking if he gets three games for us, I’ll be happy.”

The Lasers appeared to regain some momentum when Abigail Spears and Olga Govortsova held serve and then broke serve in the sixth and seventh games of their Women’s Doubles set against Kirsten Flipkens and Maria Jose Martinez Sanchez to go up 4-3. But New York’s tandem responded by breaking the Lasers’ duo on four straight points to force a tiebreak. After a compelling back-and-forth battle that depicts WTT’s theme of “Every Point Counts,” the Empire fought off a set point and broke Govortsova’s last two serves to take the 25-minute set 5-4 and push New York’s lead to 10-7 after two sets.

“(Maria) is such a great player. We started off playing aggressive, we both like to have fun on the court, we’ve been improving a lot and I think it paid off today,” Flipkens said. “We came back strong to win the last two games and that really helped.”

The most reliable pair the Empire have been able to depend on this season – Skupski and Martinez-Sanchez – had a chance to put the match out of reach and give New York a commanding lead, but Lindstedt and Spears had other plans.

Skupski and Martinez-Sanchez won 57 percent of their sets together, the most of any other category for the Empire during the season. But Springfield’s tandem, which combined to win 52 percent of their mixed doubles matches, opened a 4-1 lead after breaking Martinez-Sanchez’s serve, and went on to capture the set, 5-2, and bring the Lasers even with New York, 12-12.

“World TeamTennis is pressure no matter when you play, obviously if we didn’t get that win it would be pretty bad for us,” Lindstedt said. “I’m an emotional player. I have a lot of anger, frustration, love, happiness – I just gotta pick the right ones at the right moment.”

Flipkens found the momentum New York coach Luke Jensen was looking for from his women players, as she broke Govortsova’s serve twice in the first four games of women’s singles en route to a 4-1 lead in the set. Govortsova, who won 55 percent of her singles matches heading into the final, took the sixth and seventh games, but Flipkens closed out the set with a service break to win 5-3, and put New York back on top, 17-15, heading into the deciding set.

“I just love the way we fought, I love the way they played,” Jensen said. “It came down to losing by one game. What an amazing opportunity to be in this arena, this league, this atmosphere.”