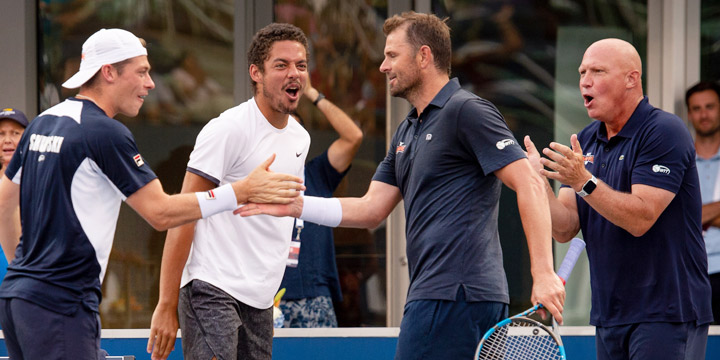 BRONX, N.Y. – A pair of former U.S. Olympians arrived for the New York Empire on Monday night, but it was a pair of season stalwarts that ultimately sealed a crucial victory for New York in the chase for the World TeamTennis playoffs.

Neal Skupski and Maria Jose Martinez Sanchez, who entered the night as the league’s top mixed doubles team, sealed a 22-19 overall victory for the fourth-place Empire over the defending league champion Springfield Lasers with a 5-2 final set over Abigail Spears and Robert Lindstedt.

LASERS vs. NEW YORK EMPIRE MATCH STATS | 2019 COMPLETE STANDINGS
“In the end, I think we solved tonight with the mixed doubles,” said Martinez Sanchez after the match.

“Neal and I have been playing in the Grand Slams in mixed doubles, so we are getting used to playing with each other. I love to play with him because he puts the power, and I have the hands, so it’s good.”

Franchise player Mardy Fish and substitute Varvara Lepchenko were also front and center in a big win for fourth-place New York against the second-place Springfield Lasers.

#WTT2019: An epic battle between @OGovortsova and Varvara Lepchenko in Women's Singles ended in a grueling Tiebreak. After one final exhausting point the @SGFLasers prevailed, tying the match 17-17 going into the final set.

The American tandem, who represented the United States at a pair of Olympic Games each won a set in the first half of the match, as Fish made his first appearance of the season for New York in his third season with the team, while Lepchenko made her Empire debut.

The newcomers had a flair for the dramatic: Fish kicked off the night with a 5-4(4) tiebreak victory in men’s singles, winning a winner-take-all point over Springfield’s Enrique Lopez Perez at 4-4 with a running forehand pass, while Lepchenko nearly pulled off a comeback for the ages in the fourth set.

She trailed Olga Govortsova, 4-2, 40-0, in Women’s Singles before eventually falling in a tiebreak, 5-4(3), which brought the match into a deadlock, 17-17, headed to the deciding mixed.

“It was nice to start off with a win. I served well and he served great. Sometimes, those men’s singles sets can be crapshoots,” Fish said.

“I don’t think we had any breakpoints or anything during the match, and it was nice to win and help the team.”

Lepchenko also put a win on the board in her team debut, as she teamed with Martinez Sanchez for a 5-3 win in Women’s Doubles over Govortsova and Spears in the second set.

“In Women’s Doubles, we were really focused from the beginning,” added Martinez Sanchez.

“In this competition, you have to get used to everything as soon as possible, because you have a lot of adversity — every day, you play in a different place with different conditions, but we’re here for this, so we have to be as strong as possible until the end.”

With the win, the Empire keep pace in a crowded playoff picture: at 7-5 overall, New York is now tied with Springfield and idle San Diego behind first-place Philadelphia.

“The defending champions, they steamrolled us in Springfield. We had some new pieces, and this doesn’t happen if Varvara doesn’t gut out games at match points down,” said Jensen.

“She lost in the end, but those games were huge. You just squeeze out games, and this whole thing is about pressure. We have veterans on this team, and they’re willing to go into the fire and face it.”

Fish enters the Empire roster in the thick of a playoff hunt — a far cry from where New York was when he joined the team for a pair of matches 12 months ago.

Last season, New York lost its first nine matches, before winning two of its last three to end the season with Fish on the roster.

“It’s the same, sort of, cast of characters but a different result [than last year],” said Fish.

“Luke [Jensen] does a great job keeping us all motivated and everything. It’s such a fun format and I’m glad that I could still be a part of it.”

Speaking of changes: after spending the whole season playing alongside Kirsten Flipkens, Martinez Sanchez needed to make a big adjustment alongside Lepchenko, who’s set to feature as a substitute on the Empire roster for the rest of the season and for its potential playoff run.

Flipkens is right-handed, while Lepchenko — like Martinez Sanchez — is left-handed.

The two southpaws, somewhat unique amongst the tennis elite, will look to lead the Empire to a place its never been before in its WTT history: New York has never made the league playoffs in its short history, with the team’s best finish being third in the 2017 season.

That year, only the top two teams made the playoffs, but New York appears primed for a playoff run following the expanded four-team format this summer.

The Empire will be back at the Cary Leeds Center on Tuesday night against league-leading Philadelphia in its last home match of the 2019 season, with Fish set to feature again for the home team. First serve is set for 6:30 p.m. Follow results on WTT.com/schedule or at nyempiretennis.com, and watch the match live at WTT.tv and ESPN+. Springfield will host the Orange County Breakers at the Cooper Tennis Complex in Springfield, Mo. at 8:00 p.m. ET.