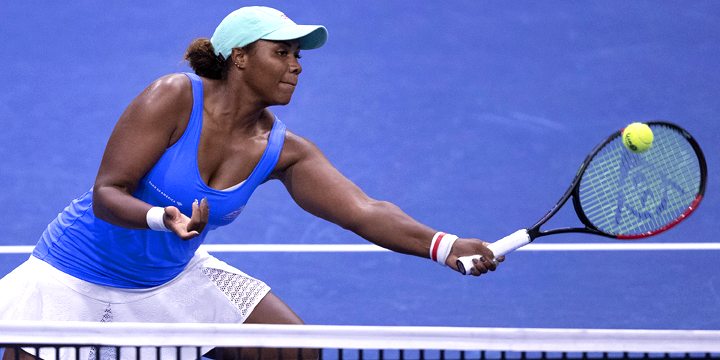 PHILADELPHIA – Taylor Townsend has closed out many big matches for Philadelphia during her six-year career with the Freedoms. In front of an enthusiastic home crowd, Townsend fought off a gutsy performance from Springfield’s Olga Govortsova to send Philadelphia home a 22-20 winner in Extended Play to keep the Freedoms perfect at home on the season.

The win was Philadelphia’s first over Springfield in three matches. Coming into Sunday night, the Lasers had defeated Philadelphia twice in a row (2018 WTT Finals and 2019 Opening Night).

LASERS vs. FREEDOMS MATCH STATS | 2019 LEAGUE STANDINGS
“Tonight was huge,” said Townsend following the match. “I realized I seemed a little tight on my serve and she was holding her serve pretty easily. I faced a lot of deciding points and I was excited I was able to hold serve.” “Kudos to Taylor for closing out the match,” Kardon said.

“I thought Olga coming in tonight and playing as well as she did was big,” Lasers coach John-Laffnie DeJager said. “It was tough to see her lose the close points but hats off to Taylor. She showed why she is the reigning Female MVP.”

That was innnnnnn-credible - @SamGrothTennis is in disbelief after Raquel Atawo shows off her great hands at the net!

The @PhillyFreedoms duo save 2 break points and win on the deciding point to take a 4-3 lead vs. Lindstedt/Spears (@SGFLasers)

With Philadelphia leading 17-14 going into the final set, Govrotsova and Townsend went punch and counter punch throughout the Women’s Singles set – which was the final set of the evening. When the set ended it was Govrotsova who prevailed 5-4 sending the match into Extended Play.

The set could have gone different if it were not for Townsend who won three deciding points in the four games she served to help stake Philadelphia to a 21-19 lead after the final set.

In Extended Play, Govrotsova held serve to slice the deficit to 21-20. Townsend would get down 15-30 on her serve before fighting back to win three straight points and close out the match.

Philadelphia welcomed the return of Mitchell Krueger who rebounded from a tough opening set 5-3 loss in men’s doubles to post a 5-1 win over Enrique Lopez Perez to give Philadelphia an 8-6 lead after two sets of play.

Krueger’s match could have gone another direction midway through the set. Holding a 3-1 lead, Lopez Perez appeared to have held serve to slice Philadelphia’s lead to 3-2. However, Hawkeye had called a foot fault that nobody seemed to have heard. The point continued and when the point ended the referee ruled a foot fault and for the point to be replayed.

With it being a deciding point Lopez would double fault giving Philadelphia a 4-1 lead in the set and a 7-6 overall lead. From there Krueger would close out the set by holding serve.

“We caught a big break with the (foot fault) call,” said Krueger. “We were fortunate, but I thought I closed the set out well.” “Mitchell’s win in singles seemed to have turned the corner for us tonight,” said Kardon. “I thought him winning his singles match was important for us.” Following Krueger’s win in singles, the Freedoms mixed doubles team of Fabrice Martin and Raquel Atawo pushed Philadelphia’s lead to 13-9 at the half thanks to a 5-3 win over Robert Lindstedt and Abigail Spears.

The Freedoms go on the road Tuesday night where they will face the New York Empire while the Springfield Lasers travel to New York to face the Empire tomorrow night. The Freedoms match on Tuesday night begins at 7:00 PM. Watch live on ESPN+ or WTT.tv or follow along on WTT.com/schedule or at Philadelphiafreedoms.com.