Springfield Lasers Back On Track After Knocking Off OC Breakers 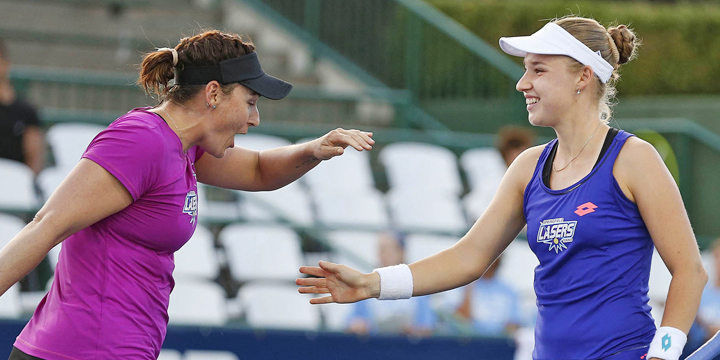 Newport Beach, Calif. – In a battle of last two King Trophy winners, the Orange County Breakers had their two-match winning streak snapped while the visiting Springfield Lasers bounced back from their first loss of the season.

BREAKERS VS. LASERS MATCH STATS | 2019 COMPLETE STANDINGS“I’m going to take my hat off, Anna (Blinkova) played really well tonight and then Enrique (Lopez-Perez) at the end. Guy is ranked 140 in the world playing against somebody that’s top-50 in the world. He really served it out well. But that’s the beauty of this format. It’s never over,” Lasers coach JL de Jager said. “I told myself if we ended this trip with a win in two of the three matches, we’ll be good.”

Enrique Lopez Perez clinches the win for the @SGFLasers 💥 against the @BreakersTennis 🌊. Then shows off his dance moves! 🕺 #WTT2019 pic.twitter.com/2hlxCkGCyH

“There is very strong competition, that’s how it should be. Any team can win on any given night so we’re really happy to get two out of three on this road trip,” former UCLA standout Jean-Julien Rojer said.

The home team got out in front to start the match, with 2017 WTT Female MVP Andreja Klepac and WTT rookie Luke Bambridge winning four consecutive games to defeat the veteran duo of Abi Spears and Rojer 5-2. The 2018 King Trophy champions then chipped into that deficit with Spears and Anna Blinkova winning 11 of 12 first serve points to defeat Klepac and 2016 WTT Female MVP Nicole Gibbs 5-3.

Two points was all the difference in men’s doubles, with Steve Johnson and Bambridge not only converting their lone breakpoint opportunity, but also winning a key deciding point to save the only break point they faced en route to a 5-2 win over Rojer and Lopez-Perez.

Twenty-year-old Blinkova then snapped a three match losing streak in singles, earning a big 5-2 win over Nicole Gibbs that set up the showdown between Johnson and Lopez-Perez to wrap up the evening.

“Today was a great day for me and I’m very happy to win both matches. I really enjoyed it and I really went for it, and I think I hit all my shots full-power haha,” Blinkova said.

Lopez-Perez spoiled local star Johnson’s season debut with the 2017 King Trophy Champions, getting the massive break in the seventh game of the set before serving out the win with a quick hold.

“At the end it was just a one-game difference and I was playing really good. Some days you play good and you win, today was that day,” Lopez-Perez said about his clinching performance.

Springfield returns home after a three-game road trip that included two one-game victories over the Vegas Rollers and Breakers, as well as their first loss since July 31, 2018 against the Philadelphia Freedoms.

Orange County is in the middle of a four-match homestand, with matches coming up on consecutive days against the Freedoms and New York Empire.

WHAT’S NEXT
Former Wimbledon finalist Genie Bouchard joins the Breakers Tuesday night when they host the first-place Philadelphia Freedoms at 9 p.m. ET/6 p.m. PT exclusively on ESPN+. The Lasers have a day off before hosting the San Diego Aviators on Wednesday at 8 p.m. ET/5 p.m. PT.