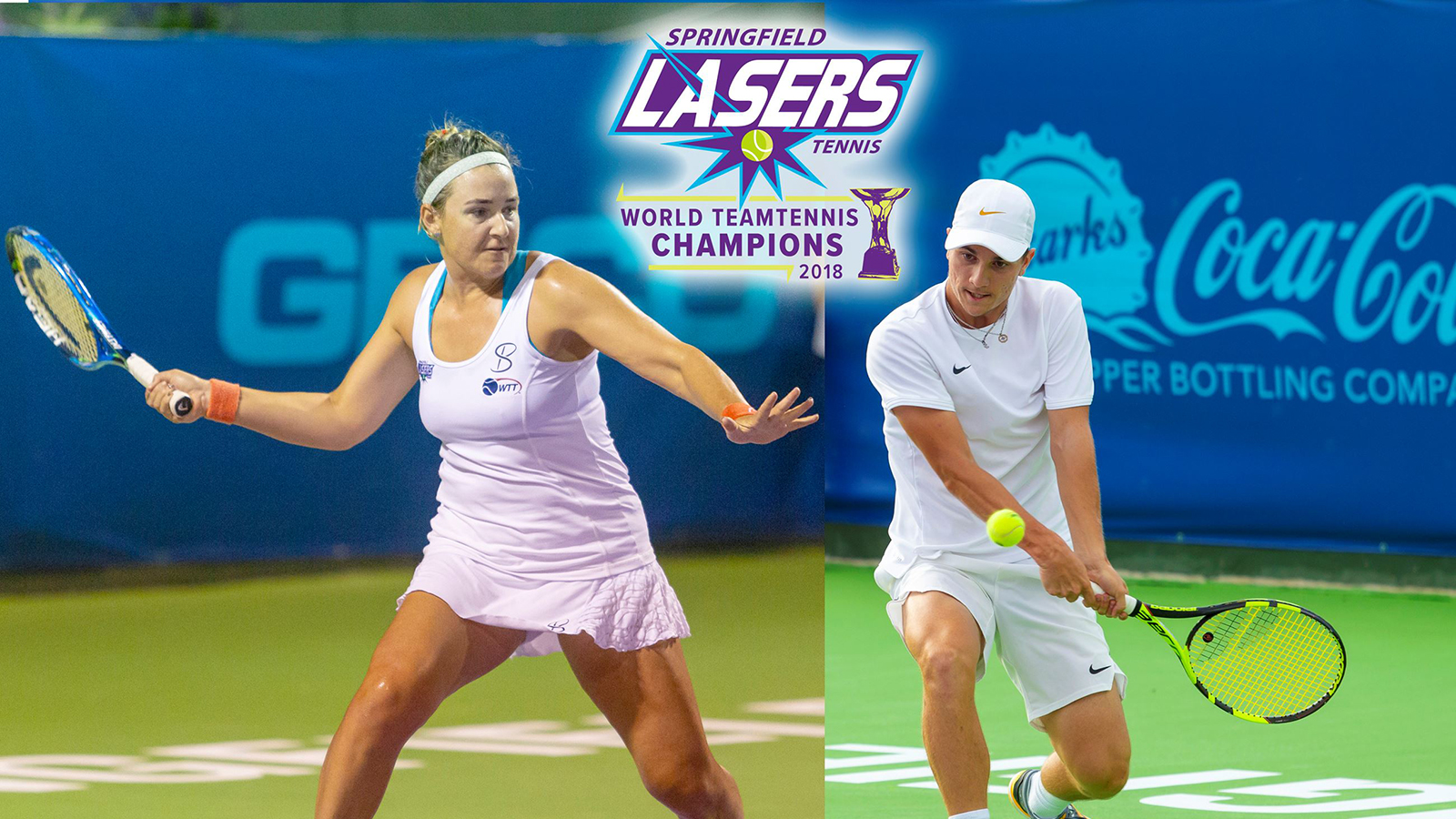 The Springfield Lasers pro tennis team, along with the rest of the World TeamTennis (WTT) league, drafted its team roster Tuesday, March 12, at the BNP Paribas Open in Indian Wells, Calif.

The Lasers, defending champions for the WTT’s King Trophy, assembled a mix of returning stars and WTT newcomers for the 2019 team. General Manager Paul Nahon, Coach John-Laffnie “JL” de Jager and Ownership Representative Bob Belote were on hand to announce the draft picks in a live broadcast on the league’s WTT.TV outlet.

The Lasers entered the draft with 2018 team star Miomir “Misha” Kecmanovic included as a franchise player. Kecmanovic, 19, clinched the winning point in the Lasers’ 2018 championship match against Philadelphia, later named WTT Championship MVP. A rising young Serbian player, he made it to the quarter-finals in Newport Beach in January. He has a current ATP rank of No. 130. As a franchise player, Miomir may play a maximum of 5 matches with the team. He is scheduled to play the first four home matches in Springfield, July 14, 16, 17 and 18.

Coach de Jager said with Kecmanovic’s career just starting out, he couldn’t take a break from the international tour long enough to play a full season of WTT. After the first week with Springfield, he’ll be playing in Atlanta.

“It’s good to keep him in the league,” said de Jager. “He’s going to be top 100. He was a major player in helping us win. Hopefully next year he can play more matches.”

The draft also began with returning doubles specialist Abigail Spearsprotected by the Lasers. Spears, 37, from Colorado Springs, helped take the team to the championship match with solid doubles play and unwavering team support, buoyed by members of her family, cheering in the stands at home matches. She is currently ranked No. 31 in doubles by the WTA, with 21 career doubles titles, including Nottingham in 2018 and the Australian Open in 2017 (playing mixed.) She also made it to the semifinals at Wimbledon last year.

The Lasers first round pick was doubles specialist Joe Salisbury, considered the league’s top pick in men’s doubles. Salisbury, 26, from London, England, just reached his career high rank of No. 21 in doubles, following a title win at Dubai earlier this month (with Rajeev Ram.) He has three doubles titles.

When asked about Salisbury as the first round choice, Belote said, “It’s all about powerhouse doubles.”

The Lasers had no second round pick, due to a late 2018 season trade, but the team had two picks in Round 3. The first was Enrique “Kiki” Lopez Perez, 27, from Madrid, Spain. Perez currently has an ATP rank of No. 138 in doubles (his career high), and No. 252 in singles. He made it to the final round in doubles at the Bangkok Open in February. Nahon said the team selected Perez because they needed a tour veteran with a blend of singles and doubles ability.

The Lasers’ second Round 3 pick went to Anna Blinkova, a 20-year-old from Russia, currently ranked No. 84 in doubles and No. 104 in singles. She turned pro in 2015, and since then has earned three ITF and one WTA singles titles as well as six ITF doubles titles.

Coach de Jager said he focused on doubles for this year’s Lasers draft.

“I’ve been part of this league for 20 years, and over the years, the teams that win have had strong doubles.” he said. “We picked up the top men’s doubles player, and with Abi and Anna, we’ll be very strong on the women’s side. The women play a massive role in WTT, and we’re very happy with the team we’ve selected.”

De Jager returns to Springfield this summer for his 13th season coaching the Lasers, and his 20th year with WTT.

“I’m looking forward to being back,” he said. “Springfield is a great place, and last year was a big year for us, so hopefully we’ll get more people to come out and support us.”

The Lasers open the WTT season in Springfield Sunday, July 14, facing the Philadelphia Freedoms, the same line-up for the Aug. 5, 2018, WTT Finals, where the Lasers captured their first Championship Trophy in the team’s 23-year history, beating Philadelphia 19-18.

A complete WTT schedule and upcoming season highlights are here. WTT semifinals will take place Friday, Aug. 2 and the championship match is Saturday, Aug. 3. Locations to be announced.

Lasers VIP and season ticket packages are available now. Contact Paul Nahon at 417-837-5800. Individual tickets will be available in May.